Request A Call Back

(by signing up, you agree to our terms and conditions)

Early morning after breakfast (packed breakfast), drive to Jankichatti / Phoolchatti & trek from here to Yamunotri (6kms) (Either by walk or by horse or by Doli at own cost). After taking bath in Jamunabai Kund’s warm water and cook rice by packing it in a cloth and dipping it in the hot water of the hot kund. Pilgrims take this cooked rice home as "Prasad". Having Darshan of “Yamunaji” return to Jankichatti by trek. Overnight stay at Barkot.

Yamunotri Temple: Maharani Gularia of Jaipur built the temple in the 19th Century. It was destroyed twice in the present century and rebuilt again.

Surya Kund: There are a Number of thermal springs in the vicinity of the temple, which flows intonumerous pools. The most important of these is Surya Kund.

Yamunotri- Yamunotri is situated in the western region of the Garhwal Himalayas and is at a height of 3,235 meters above sea level. Yamunotri is the source of the river Yamuna.The shrine of Yamunotri is located on the Bandar Poonch peak.

Uttarkashi: Situated at the bank of river Bhagirathi. The temple of Lord Vishwanath is located here where a massive iron trident is erected. The other important temples situated here are Ekadash Rudra, Bhairav, Gyaneshwar and Goddess Kuteti Devi.

Early morning (packed breakfast) drive to Gangotri(3048 mts), enroute at Gangnani take a holy dip in Garam Kund, have bath drive to Gangotri via beautiful Harsil Valley. Harsil is famous for its nature beauty and for the majestic views of the Deodar trees and mountains. On arrival at Shree Gangotri, take a holy dip in the sacred river Ganges which is also called Bhagirathi at its origin. Perform Pooja and Darshan, after that relax for some time in the lovely surroundings. Later drive back to Uttarkashi. Overnight stay at Uttarkashi.

Gangotri- Gangotri is the place high in the Garhwal Himalayas from where the holy Ganges originates. According to the legend, it was here the Ganga descended on the earth, when Lord Shiva released the mighty river from the locks of his hair. The temple of Gangotri, dedicated to Goddess Ganga stands on the bank of the river.

Morning after breakfast, drive to Guptkashi via Moolgarh & Lambgoan. Enroute you can see the beautiful river Mandakini at Tilwara. The Mandakini river comes from Kedarnath, drive alongside the river to reach Guptakashi, visit Ardh Narishwar Temple in Guptakashi. Check into the hotel arrival in Guptakashi. Overnight stay at Guptakashi.

Morning after breakfast drive to Gaurikund, Trek start from Gaurikund to Shri Kedarnath ji (3584 mts) on foot or on by pony / Doli. Yatra members should carry personal medicines, heavy woolen, tolietteries and clothes for an overnight halt at Shri Kedarnath. Check in Hotel. After freshening up, visit Shri Kedarnath ji Temple & perform Pooja. In the evening also visit Adi Shankaracharya Samadhi behind the Temple. Overnight stay at Kedarnath hotel.

Shri Kedarnath- is a majestic sight, standing in the middle of a wide plateau surrounded by lofty snow Covered peaks. The temple of Kedarnath, located at a height of 3,581 mts, stand at the head of the Mandakini river. The present temple, built in the 8th century by Adi Shankaracharya, stands adjacent to the site of an earlier temple built by the Pandavas. The inner walls of the assembly hall are decorated with figures of various deities and scenes from mythology. Outside the temple door a large statue of the Nandi Bull stands as guard. It is said that devotees who die here become one with Shiva himself.

On this day we will stay in Sitapur to keep a buffer time in hand to handle any last moment delay because of bad weather or any technical or medical reason. This is best way to arrange an itinerary or program for both trekkers and flyers to Shri Kedarnath Ji. In lack of geographical knowledge and climate conditions of this divine land some passengers or some travel agents or tour operators use to keep neck to neck to program for 02 nights in Kedarnath Ji region this always create problem and they themselves use to disturb their further program. You should cover the sight-sing or Darshan of Shri Triyugi Narayan Temple (Optional and Chargeable Extra) for maximum use of this day if we stay in Guptkashi/Sitapur. 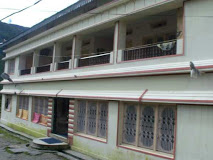 Morning after breakfast, drive to Shri Badrinath. Check in to the hotel arrival in Shri Badrinath. Pilgrims after having a bath in the Taptkund have the Darshan of  Badrivishal & Aarti in evening. Brahamakapal is significant for Pinddan Shraddh of ancestors (Pitrus). There are other interesting sightseeing spot like Mana, Vyas Gufa, Maatamoorti, Charanpaduka, Bhimkund and the “Mukh” of the Saraswati River. Just within the three kms of Badrinathjee. Overnight stay at Shri Badrinath.

Shri Badrinath- Shri Badrinath is one of the most important of all the four(Char) Dhams in India. This temple located between Nar & Narayan mountain ranges and in the shadow of Nilkantha peak at the height of 3,133 mts. It is the most popular of Vishnu pilgrimages among the five Badries, also known as Vishal Badri.

Tapt Kund: Natural thermal springs on the bank of the river Alaknanda, where it is customary to bathe before entering the Badrinath temple.

Narad Kund: A recess in the river, near Tapt Kund, forming a pool from where the Badrinath idol was recovered.

Mata Murty Temple: Devoted to the mother of Sri Badrinathji. Other important temples include SeshNetra Temple, Urvashi Temple and Charanpaduka

Mana Village: Inhabited by an Indo-Mongolian tribe, it is the last Indian village before Tibet.

Bhim Pul: On the other side of Mana village, a massive rock forming a natural bridge lies over the roaring Saraswati River. It presents a spectacular view of water thundering down through the narrow passage under the rock and is believed to have been placed there by Bhim, the second eldest among the five Pandava brothers.

Vyas Gufa (cave): Near Mana Village, this is a rock-cave where Ved Vyas is believed to have composed the Mahabharata and the pauranic commentaries. 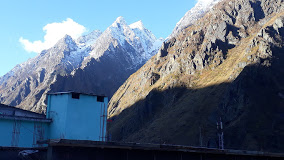 Rudraprayag: One of the holy prayag of five famous prayag of Uttarakhand. Confluence of River Alaknanda and Mandakini.

Narsingh Temple: This is an ancient temple of Lord Vishnu in Narsingh Avtar and main temple of Joshimath. When Badrinath temple remain closed during winter every year, one idol of Lord Badri is brought to Narsingh temple and worshiped for six months.

Request A Call Back